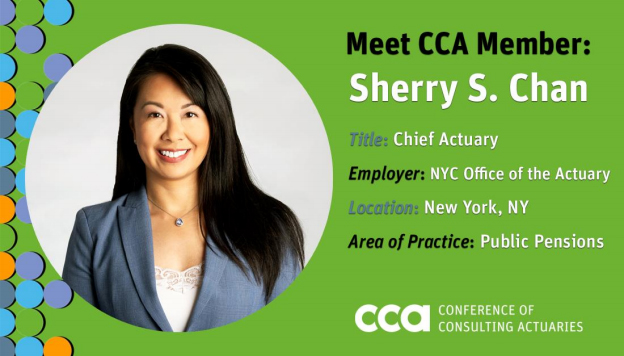 “Written in the Stars: The Common Denominator for Society’s Greatest Achievements”

Life can often seem to be a series of random, chaotic events and in some respects it is. However, when we step back and examine it from afar, there remains a constant current of order that runs through it – a method to the madness. After all, within all that chaos there exists the universe and mathematics – which are two of New York City Office of the Actuary’s Chief Actuary Sherry Chan’s favorite things…and with good reason.

In her undergraduate studies, she took on a lofty course load with a double major in mathematics and actuarial science and a double minor in economics and Chinese, but only because she could not pursue her first choice at her alma mater – astrophysics. If you happen to think these schools of thought have little to do with one another, think again – as they have everything to do with each other. Why? Because mathematics is the language of science.

[The universe] cannot be read until we have learnt the language and become familiar with the characters in which it is written. It is written in mathematical language, and the letters are triangles, circles and other geometrical figures, without which means it is humanly impossible to comprehend a single word.

That is to say, the universe has been written in the language of math; and while physics and astronomy are useful in their own right, Sherry has discovered that math is a universal language in more ways than one and that it continues to be able to communicate profound insights in new and exhilarating forms. She is (and has been) moving the needle when it comes to further incorporating the use of high-quality data analytics in performing actuarial tasks. Her professional universe currently consists of New York City pension stakeholders and she knows she must use every cutting-edge tool available to serve them to the best of her ability. Yet, what it all comes down to in the end is, you guessed it, math. As Sherry herself puts it, math is: “…the common denominator for society’s greatest achievements!”

So, we implore you to take a moment to get to know this incredibly astute actuarial leader, CCA member, champion of the CCA Women in Consulting Community, and all-around delightful person: Sherry S. Chan!

How did you get into the actuarial profession?

I was sold by a pamphlet! Early in my undergraduate studies in math at The Ohio State University, I began thinking about my career path and I came across a pamphlet on the actuarial science profession. It caught my attention! I knew I wanted to apply my math skills in the business world, so actuarial science seemed like a good career choice. Since then, I’m proud to say my applied math skills have been and are being used to provide a secure retirement to millions of public servant heroes in my home state of Ohio and current City of residence in New York.

What is the strangest thing someone has told you they assumed about being an actuary or what it means to be an actuary?

What is your favorite part about being a CCA member?

How the culture is so friendly, open-minded, and transparent! CCA gives you opportunities to interact with colleagues and welcomes the sharing of new ideas and experiences.  I also appreciate how CCA gives you the opportunity to build your network through a very welcoming and inclusive environment!

Do you have a favorite book, newspaper, blog, or writer?

Stiletto Network, by Pamela Ryckman, is one of my favorite books because it shows when women come together, they can make change. I found the stories and the themes to be very inspirational! The female entrepreneurs and business leaders highlighted in the book demonstrate that when like-minded people come together, lives are improved, friendships are formed, and tight and fruitful networks that help everyone succeed, are made.

Where did you go to school and what did you study?

I went to The Ohio State University (OSU) and double majored in mathematics and actuarial science and double minored in Economics and Chinese in undergrad. I received an Executive MBA from OSU’s Fisher College of Business as well.

How do you define success?

Success is when you are happy with what you did with your time.  You have no regrets when you look back and even though some situations may have been bad or difficult, if you are happy you spent the time the way you did, then you’ve achieved success.  As cliché as it sounds, we only have one life to live – so why waste it NOT being happy?  I hold this belief in both my professional and personal lives.

What do you see as of the future of the profession?

Actuaries will embrace data analytics even more as we continue to be a data-rich society.  Our training and expertise will be valued even more because we have the ability to bring the data to life and put the pieces together to not only tell stories but provide the foundation for and lead the world in future innovations. Data interpretation and leadership is at the core of our profession; we are the data pioneers and we will continue to take our expertise to the next level.

How do you define yourself as a Consulting Actuary (i.e. what does it mean to be a consultant)?

Consulting actuaries translate complex data sets, models, and results into something that is understandable for their clients.  As a pension actuary, I do this currently by explaining pension math to all the New York City pension stakeholders.

What is the most important thing you’ve learned in the last five years?

In May 2020, I celebrated my fifth anniversary at the NYC Office of the Actuary, so my last five years have been full of learning opportunities, to say the least!  The most important lesson I’ve learned in the last five years in City government is that sometimes you need to take that opportunity that’s presented to you and not be too greedy because a better one may never materialize. In actuarial roles, there oftentimes are so many moving pieces, stakeholders, and viewpoints, that a certain offer or solution may not remain on the table, so be sure to consider grabbing what you can now because you can always work on the bigger and the better later!

My dream job was to be an astrophysicist for NASA before I learned at freshmen orientation that my school of 200+ majors, and one of the largest universities in the country, did not have that as an undergrad major! The stars must have been aligned (yes, pun intended!) for me to be an actuary because this led me down the math path.  I am proud to be a mathematician because math is integrated into everything! As depicted in the movie Hidden Figures, and clearly demonstrated in the scene in which one of the female mathematicians is standing on a ladder doing intricate math on a chalkboard, math can be used to get our astronauts home safely, provide retirement security to those who serve the public every day, and so much more. Math is the common denominator for society’s greatest achievements!

What do you do in your free time?

Sleep, yoga, and golf – in that order of priority! As much as it is important to invest in and care for your career, it is as equally, if not more, important to invest in and care for yourself and especially the mental health – be it through sleep, yoga, or even the discipline of golf! Nothing else can advance in your life if you are not cared for first!

Thank you, Sherry, for taking the time to share this with us and the actuarial community!

[Have a question for Sherry? Send the CCA an email at conference@ccactuaries.org containing your contact information, and we’ll get the message to her on your behalf.]