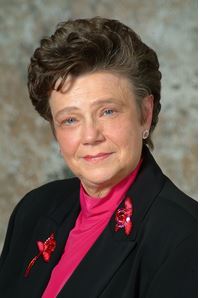 Barbara Jean Ida Lautzenheiser, 81, of South Glastonbury passed away peacefully on Tuesday, March 10, 2020. She was the widow of Gene R. Strauch. Barbara was born on November 15, 1938 in La Feria, TX to the late Fred and Verna (Springer) Lautzenheiser. Barbara grew up in Lincoln, Nebraska and graduated from Nebraska Wesleyan University in 1960 with a double major B.A. with High Distinction in Mathematics and Science.

Barbara began her career in 1960 as an actuarial trainee with Bankers Life Nebraska and rose to the position of Vice President and Actuary. In 1980, she became Senior Vice President in charge of the actuarial, underwriting, corporate accounting, planning and taxes, and reinsurance departments of Phoenix Mutual Life Ins. Co. in Hartford, CT. In 1984 Barbara became the first woman to head a major insurance company in the US when she became President and Chief Operating Officer of Signature Group’s three insurance companies (Montgomery Ward Life Insurance Company, Montgomery Ward Insurance Company and Forum Insurance Company), in Schaumburg, IL. In 1986, Barbara returned to Hartford, CT and began her own highly successful actuarial consulting business, Lautzenheiser & Associates, of which she was owner and principal until 2018.

Barbara held many noteworthy positions of distinction within the actuarial industry. In 1982 she was named the first woman President of the Society of Actuaries. In 2003 she was elected President of the American Academy of Actuaries, only the second woman to hold that position at that time. She was a past member of the Conference of Consulting Actuaries (where she also served on their Board of Directors), the Actuarial Standards Board, and the International Actuarial Association. Barbara was an Emeritus Trustee of The Actuarial Foundation. She authored many papers and was considered an industry expert. Among her numerous awards and recognitions, she was Recipient of the Young Alumni service award from Nebraska Wesleyan University in 1971, the Corporation Woman award from the Women Business Owners of New York in 1983, the C.H. Poindexter award for distinguished achievement and exceptional service to the association and insurance industry from the National Association Life Companies in 1989, and the Lifetime Achievement award from the Conference of Consulting Actuaries in 2015. She was a true trailblazer and broke many glass ceilings.

Barbara loved all animals, especially her cats, and she enjoyed art, travel and shopping.

In addition to her husband and parents, Barbara was predeceased by her sister, Charlene Lautzenheiser.

A graveside service will be held at 3:00 pm on Monday, March 23, 2020, at Wyuka Cemetery. Donations in Barbara's memory may be made to: American Cancer Society or Alzheimer's Association.